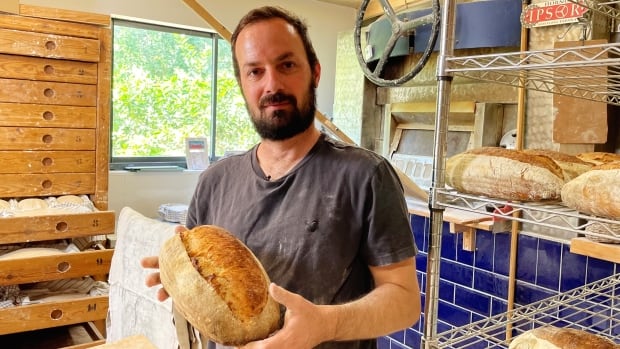 Artisanal baking is undergoing a resurgence around the world — and that includes Israel.

Hagay Ben Yehuda is one of a small number of Israeli bakers who stick close to the old ways, working by hand with organic ingredients to produce healthier, tastier bread. He is a fifth-generation baker, working at a small artisanal bakery at Kibbutz Einat, in central Israel, where he’s returning to his roots and pioneering the search for heirloom grains.

He wants to recreate the taste of the past and to produce loaves that are close to the original bread eaten all the way back to biblical times.

“This place of the Middle East is where everything began in terms of wheat,” Ben Yehuda said, deftly kneading dough by hand at his bakery.

Wheat was first cultivated in this region some 10,000 years ago. Known as the Fertile Crescent for its shape, it included several countries in the Middle East, including modern-day Syria, Lebanon, Israel, the Palestinian territories, Jordan and Egypt, as well as parts of Turkey, Kuwait and Iran.

But in present-day Israel, heirloom grains have been replaced by industrialized wheat and modern farming methods.

“When I first read about baking with traditional grains about eight years ago now, it was being done by European bakers,” Ben Yehuda said.

“I travelled to France to do a course, and they asked me, ‘But what about your ancient wheat? We should come to learn from you!’ That really got me thinking,” he said, as he shaped loaves and placed them in baking tins.

“It changed the way that I looked at my profession, because until then, I looked to France, Germany and Italy as the mother of baking. So I started this adventure of discovering the treasure that we are sitting on here and don’t even know as bakers.”

Interest in baking with heirloom grains has come later to Israel than other countries in North America and Europe. Over the past seven to 10 years, as it’s intensified, Ben Yehuda has been one of the pioneers.

Going back to the future of wheat has involved a steep learning curve — and a revamp of his bakery. He now mills his own flour, and along with a milling machine that separates the bran from the grain without crushing either, has invested in a hand-operated Spanish stone oven that rotates the loaves during baking.

Along the way, this project has also turned him into an organic farmer.

“I didn’t know anything about agriculture at all. So it was a quest for me. And I felt that if I want to be a good baker, I have to know my field,” Ben Yehuda said. “I have to go back to the source of our main ingredient, exactly as a winemaker knows their vineyard. I think we need to be like that in the baking world, too.”

To know a field, you need seeds to plant, but these weren’t easy to find. In the end, Ben Yehuda approached Israel’s agricultural research institute, the Volcani Center.

Researchers at the centre were taking part in the Land of Wheat project, a national effort to revive heirloom wheat varieties so there would be alternatives in case disease struck Israel’s crops. But when the researchers began their work, the cupboard was bare.

“When we want to work with ancient grains here in Israel, like the French breeder or the North American breeder, … we discovered that it’s actually very hard because there is none,” said Roi Ben-David, winter cereal breeder and researcher at the Volcani Center.

The researchers went on the hunt in collections and gene banks, locally and internationally, until they located a few forgotten packages containing some heirloom seeds in Israel’s gene bank. After planting and harvesting them, they produced enough to get Ben Yehuda started.

“My concern is that after the researchers from Volcani Center will finish, all the grains will go back to the freezers of the gene bank. And I want them to keep on living,” he said.

When Ben Yehuda told the researchers that his next goal was to combine different types of heirloom wheat in his baking, the institute planted one field with more than 100 varieties, including the intriguingly named Shin Jamal, the Tooth of the Camel. They call it Hagay’s field.

“For Hagay, the single ancient grain line is not enough,” Ben-David said. “He wants to take a mixture and to create a kind of diversity within his grain sample, actually within his flour sample.”

Looking out as the field is harvested, Ben Yehuda says he is grateful for this help on his journey as a baker.

“I always search for my authentic place because I’m not a European, and on the other hand I’m not coming from the Arabic culture. But I am living and I was born in the Middle East. So this is where I’m searching for myself,” he said.

An Israeli baker hunted down the seed for ancient Middle Eastern grains, which he has cultivated, milled and turned into bread for his modern customers.

‘I am a baker, and taste is above everything’

Back in his bakery at the kibbutz in Petah Tikva, Ben Yehuda removes loaves from the cupboard where they have been rising, slashes each top and inserts them one by one into the rotating oven using a large wooden peel, as the spade-like baking tool is known.

After an hour, he removes freshly baked sourdough loaves, crunchy on the outside and soft and dense on the inside, and stacks them on steel shelves to cool. He experiments with such flours as emmer and einkorn, and also mixes together varieties of the local heirloom wheat. He believes that, as with wine, the mix affects the flavour of the bread.

Ben Yehuda says he believes taste is vital for people to be willing to pay the higher prices for handmade organic bread from heirloom grains.

“In the end, I am a baker, and taste is above everything, it has to be,” he said. “A good story won’t save a loaf that is not tasty, people won’t buy it more than once.”

Ben Yehuda says his most popular loaf is also the most expensive — made from an old wheat called einkorn, which is low in gluten. For this reason, it is more difficult to knead and bake. He’s learned how to manage this ancient grain from German bakers who use rye, a similar grain in this sense.

“I love the taste of einkorn. It has been the big discovery of this journey for me,” he said. “It is interesting how much the people who are looking for health and taste agree with me.”

Every Friday, Ben Yehuda takes his loaves to the Tel Aviv farmers’ market. Situated on the seafront at the city’s port, it’s packed with colourful produce. Near his stall, there are seasonal vegetables, Lebanese sweets, traditional Druze pita bread and Japanese beer and condiments for sale.

Ben Yehuda says his main purpose is to get the message out about heirloom wheat and to gauge the public’s response to his bread.

Pensioner Nurit Ungar has become a regular customer. “I love the taste of this bread,” Ungar said. “Plus, to have the possibility to taste something that people ate hundreds of years ago here — here! — I think it’s important and very touching.”

Shir Halpern, who founded the farmers’ market, says she admires the effort Ben Yehuda makes to communicate. “His interaction with clients is unbelievable because people come for Hagay, they come for the breads and they really come to learn from him,” she said.

Ben Yehuda says he is still striving to find the perfect combination in terms of taste and a connection to the past. Perhaps one day, he will succeed in creating the bread of their ancestors for modern Israelis.