One of the most important events in Alberta’s history occurred on this day when the province took control of its natural resources.

On Oct. 1, 1930, the Natural Resources Transfer Agreement, signed by the province and the federal government the previous December, took effect.

“I rate it in the top one or two events in our history,” said former premier Peter Lougheed. “It would have been dramatically different if it had remained that the oil and gas resources were controlled by the federal government.

“I believe it would have created incredible resentment and antagonism toward the national government . . . particularly when it was clear all the other provinces, except Alberta and Saskatchewan, owned their own resources.”

He said it was nothing short of discrimination when the federal government retained control of the natural resources of Alberta and Saskatchewan when the two provinces were formed.

It was a cloud — for Conservative Calgary, at least — that hung over the celebrations in Edmonton on Sept. 1, 1905.

The Calgary Herald pulled no punches.

It rankled Senator James Lougheed, the former premier’s grandfather, who was an ardent supporter of rights for the West.

“My grandfather worked on this for quite a bit of his life, trying to eliminate the discrimination,” said Lougheed.

“It was 25 years before it got fixed, and I think ‘fixed‘ is the operative word.”

Lougheed said Albertans should give credit to John Brownlee, the premier who persevered until he persuaded Prime Minister W.L. Mackenzie King to hand over control of the province’s resources.

Before entering politics, Brownlee was a Calgary lawyer who had articled with the prestigious firm, Lougheed, Bennett, Allison & McLaws.

He is known for having been forced out of office because of a sex scandal, but perhaps he should be known as the province’s greatest premier, says historian Donald B. Smith, because of his success in bringing home control of Alberta’s resources.

Brownlee, named premier in 1925 after serving as attorney-general for four years, met several times with Mackenzie King. The agreement was finally signed on Dec. 14, 1929, to take effect the following October.

The premier returned to Edmonton to be met by 3,000 cheering people, a huge bonfire, fireworks and a brass band.

“A wealth that can be measured in billions, a heritage that was lifeblood to the pioneers, now becomes the property of its rightful heirs, the people of Alberta,” wrote an anonymous Calgary Herald reporter on Oct. 1, 1930.

That vast wealth wasn’t immediately apparent at the time — Alberta’s oil industry was in its infancy and centred mostly on the Turner Valley oil field.

It would another 17 years before the Leduc discovery, but the agreement had put the province on the path to prosperity.

Roger Gibbins, political scientist and president of the Canada West Foundation, shudders to think what Alberta would have been like without control of its resources.

“The management of those natural resources would have resided in the federal government rather than with the province,” he said.

“If control of our resources had rested outside the province, I have no confidence they would have been managed wisely.

“Resource management has been so critical to the development and evolution of the province.”

After Peter Lougheed became premier, the province again found itself at odds with Ottawa over natural resources. As Alberta celebrated its 75th anniversary in 1980, the battle climaxed with Pierre Trudeau’s National Energy Program, which attempted to redirect oil and gas revenues to the federal treasury.

Lougheed turned down the taps until the federal government gave in, and modified the program.

Prime minister Brian Mulroney erased the final traces of the NEP in 1984. 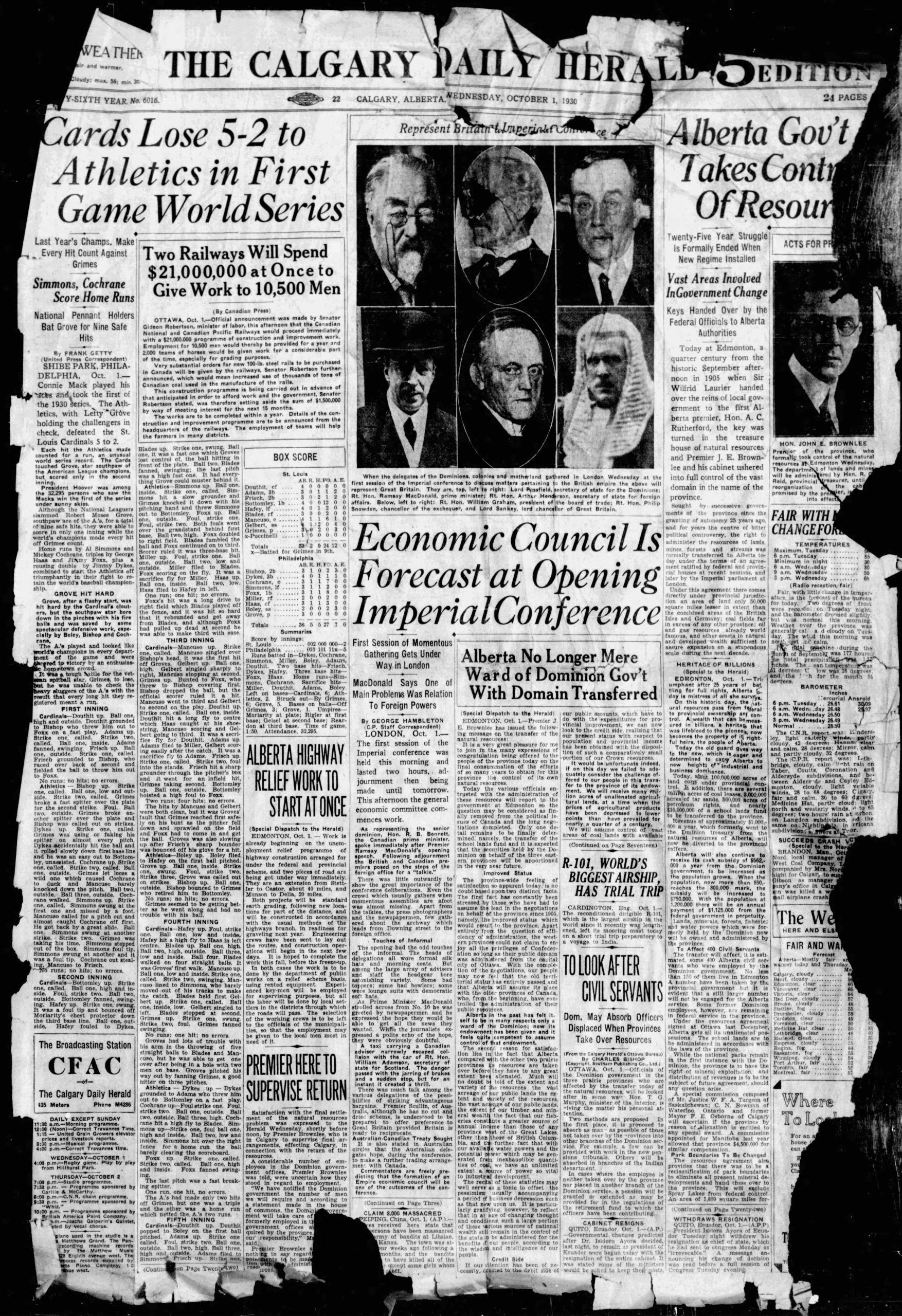 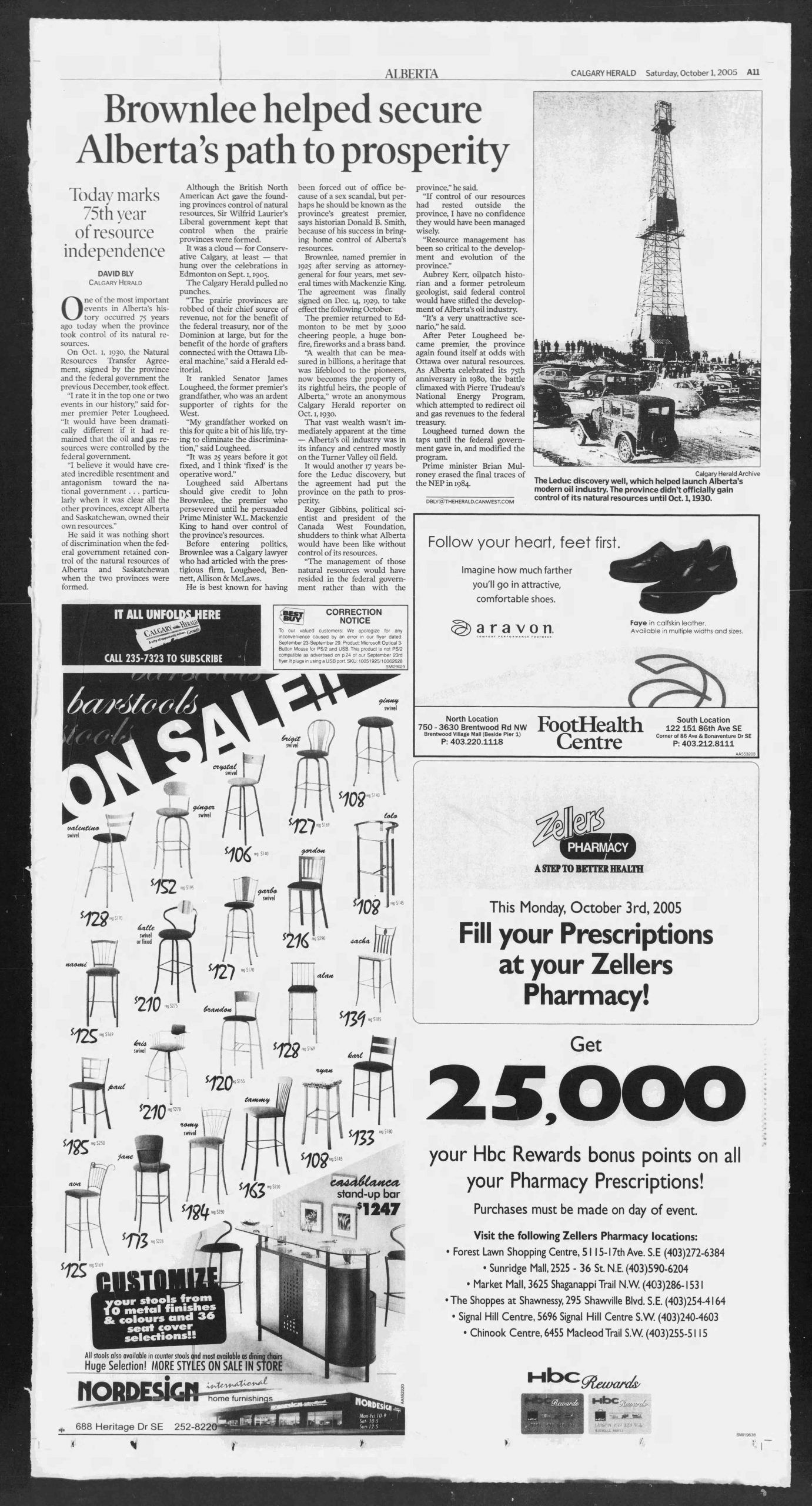