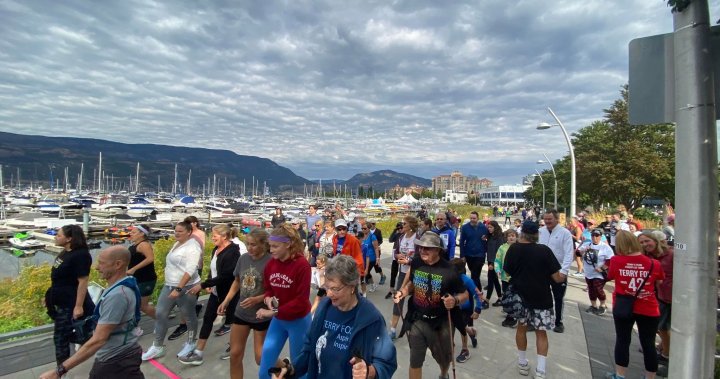 The 42nd annual Terry Fox Run returned to an in-person event after a two-year pandemic pause.

“It’s been three long years while we have had virtual events – there has been nothing like getting together with three to five thousand of your closest friends to honour our hometown hero Terry Fox,” said Terry Fox Run organizer Dave Teixeira before the run began.

“A lot of excitement and I just can’t wait for the run to start in a couple of hours.”

Terry Fox was a Canadian athlete, humanitarian, and cancer research activist who set out to run across Canada after losing his leg to cancer at 18 years old. His run was in pursuit of the goal to find a cure for cancer.

“I’m old enough to remember when Terry ran, I was 18 at the time he ran in 1980 and he was 21 at the time, and I’ve followed it since,” said the co-chairman of Kelowna’s Terry Fox Run, Dr. Michael Humer.

The run has become a Canadian tradition and according to Humer, 560 communities across the country host a Terry Fox Run.

“It’s absolutely a great thing about being a Canadian. This is a community event, it’s a Canadian tradition — and it’s also international,” said Humer.

“And really, the principles are the same as they’ve always been. It’s raising money for cancer research.”

Humer, who is a thoracic surgeon at Kelowna General Hospital, went on to say that cancer has not only touched his life professionally but that many people have been impacted by the disease.

“We deal with primarily esophageal and lung cancer, and we’ve made tremendous improvements over the last 42 years. But there’s a lot of work that still needs to go, so, therefore, with our volunteers across Canada, this process is about raising money for cancer research.”

In Kelowna, runners took off from Stuart Park instead of Mission Park Sports Field, where the event took place pre-pandemic.

“This is one consolidated run in Kelowna. Some people will do five kilometers, some will be doing ten and then we also have a one-kilometer route for people who want to go a shorter route.”

In memory of Fox’s legacy, people are encouraged to run, walk, skateboard, bike, or rollerblade.