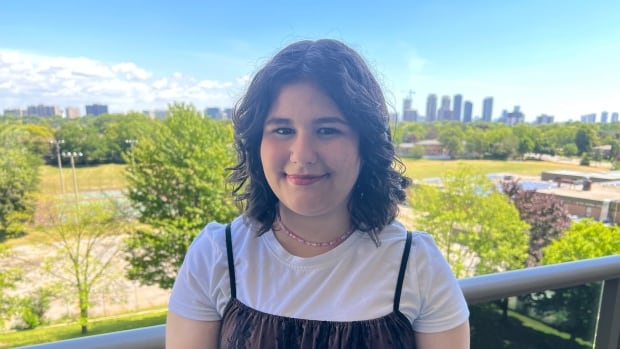 When Alexis Da Ponte was accepted to her desired program at York University — a Bachelor of Fine Arts concurrent with a Bachelor of Education — she was thrilled to begin a new chapter of her life this fall.

“I am the first to go to university… Both my parents after high school, went straight to working. So I’ll be the first to kind of experience it,” said the 17-year-old who recently graduated from high school.

But the day after her prom, and the day before her graduation, she received a  letter saying she was not eligible for funding from the Ontario Student Assistance Program (OSAP)..

Da Ponte, who lives with her parents and grandmother in an apartment in Toronto’s west end, says her family lives paycheque-to-paycheque and although they’ve been working to save, they’re unable to contribute substantially to her schooling.

“My parents both barely make enough to kind get by … It’s definitely not enough for me to go through university.”

In 2019, the Ford government overhauled the OSAP system with changes that included making dependent students ineligible for OSAP grants if their family earns more than $140,000, increasing expected parental contributions for loans and changing the definition of an independent student. Three years later, with inflation pushing many students’ costs upward, and a return to in-person learning driving up housing and travel costs, many say those changes are affecting them more than ever.

Da Ponte says while she’ll be able to cover tuition for her first year with help, she has no idea how she’ll cover the remaining three years.

“I don’t truly know if I’m going to be able to continue my education as steadily as I thought I would be able to with OSAP,” said Da Ponte, who says she’ll try to apply for a line of credit.

The changes to OSAP have impacted Vivian Miyata, a third year student at McGill from Ontario.

She has been eligible for OSAP but has watched as more of her grants turned into loans. Even then, that money doesn’t cover her tuition, let alone books and living costs. In 2021, those costs went up as she moved to Montreal when in-person classes returned.

“I feel like OSAP hasn’t really reflected the increased living costs this past year. Obviously, groceries have gotten so expensive, everything in terms of rent. Housing is so difficult to find.”

Another change to OSAP is the length of time until a student is considered “independent,” which is now six years, versus four years previously. Until then, they are required to submit their parents’ income, and that has an impact both on their eligibility for funding and the amount they receive.

“I think that it’s kind of another blow,” said Tushar Sood, who is moving on to medical school in August at the University of Toronto, where he’ll be responsible for tuition that’s nearly four times higher.

Sood finished an three-year undergraduate science degree at Hamilton’s McMaster University. He relied on OSAP for most of those years, but because he had to declare his parental income, he was eligible for fewer loans and grants. Because of the provincial change, he won’t be considered “independent” until his final year of medical school, meaning he’ll be eligible for less funding for the bulk of the program.

“I would really call on the federal and provincial counterparts to lower it to two or three years out of high school and focus more-so on the cost of the degree rather than how long it’s been since high school,” said Sood.

Student groups say the changes are impacting students now more than ever with rising cost of living, food and with students returning to in-person learning.

“One of the biggest struggles that I’m hearing from students is dealing with things like transit, for example, and just having to pay for monthly transit passes because now school is going back in person,” said Sarah Abdillahi, national executive representative with the Canadian Federation of Students Ontario, a group that is pushing for more acessible education.

Abdillahi, who relies on OSAP herself, says some students are heavily reliant on food banks and are being forced to make tough decisions.

A group called the Ontario Undergraduate Student Alliance (OUSA) says it all takes a toll on mental health and academic performance.

“Students are expected to keep up their grades while paying off their tuition and living out all these different components while recovering from a global pandemic. So all of these things have certainly taken a toll on students’ mental health,” said Jessica Look with the OUSA.

In a written statement, the provincial Ministry of Colleges and Universities told CBC News it continues to work with the federal government to implement more programs and changes to help post-secondary students.

“To help reduce challenges in the repayment process, Ontario reduced tuition at publicly-assisted colleges and universities by 10 per cent in 2019-20, applied a tuition freeze in 2020-21 and 2021-22, and will again freeze tuition in the upcoming 2022-23 academic year,” the statement reads.

Opposition MPPs like Laura Mae Lindo, the Ontario NDP’s critic for colleges and universities, say they hope OSAP will be part of discussions once Queen’s Park returns.

“There are a lot of questions about whether or not when the budget gets tabled in August … whether we will actually see any kind of investment in the sector,” Lindo told CBC News.