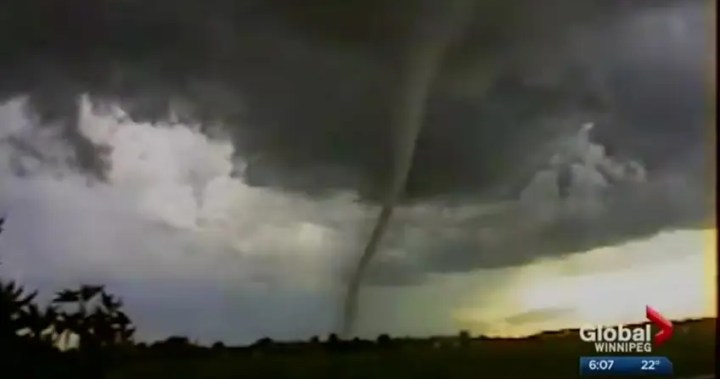 Fifteen years ago, Les Kauppila and his family became a part of Canadian meteorological history.

“We were just sitting there after work. … It was a hot, humid day. We were sitting there with our daughters, having a beverage, and kind of got a little shower, some pretty heavy raindrops and then it stopped,” he told 680 CJOB’s Connecting Winnipeg.

Kauppila’s daughters both went out, one to visit a friend, the other to check out the Red River Exhibition in the city.

“We were just deciding what we should do: Should we have supper? Go to the city? … All of a sudden, my daughter phoned back,” he recalled.

“She was halfway to Winnipeg, and they were getting hit with large hail on the highway. She looked out the window and said, ‘Oh, there’s a funnel cloud,’ but she didn’t really know where it was.

“About two minutes later, I see this thing coming down a road to the west of us, maybe 100 yards away, and when I see the dust flying, I headed for the basement.”

That “thing” was a tornado — the first and only tornado in Canadian history to register an “F5” on the Fujita scale.

According to Environment Canada, the tornado, which stayed on the ground for about 35 minutes, was around 300 metres wide. Its top wind speed was estimated to be between 430 and 510 km/h.

An F5 is the most powerful tornado measurable, accounting for less than one per cent of twisters worldwide.

“When it was over, the house was gone, and thankfully we were still alive,” Kauppila said.

“We got out of the basement and everything was gone.”

Incredibly, no one was injured when the storm slammed into the small community, although a handful of other houses suffered a similar fate to the Kauppilas’ home.

The family, he said, was lucky enough to have a carpenter friend who offered to help them rebuild, and by a week before Christmas, they were in a new home.

Although he says he wasn’t traumatized by the event, Kauppila admitted to having concerns whenever the weather starts to turn — even a decade-and-a-half later.

“When you see these dark clouds and thunder and lightning, you’re always outside looking at the sky, which we never did before. You never thought anything of it,” he said.

“If you see something really bad out there, you’re looking for a place to maybe go and hide if you have to.”

0:43Tornado touches down in western Manitoba