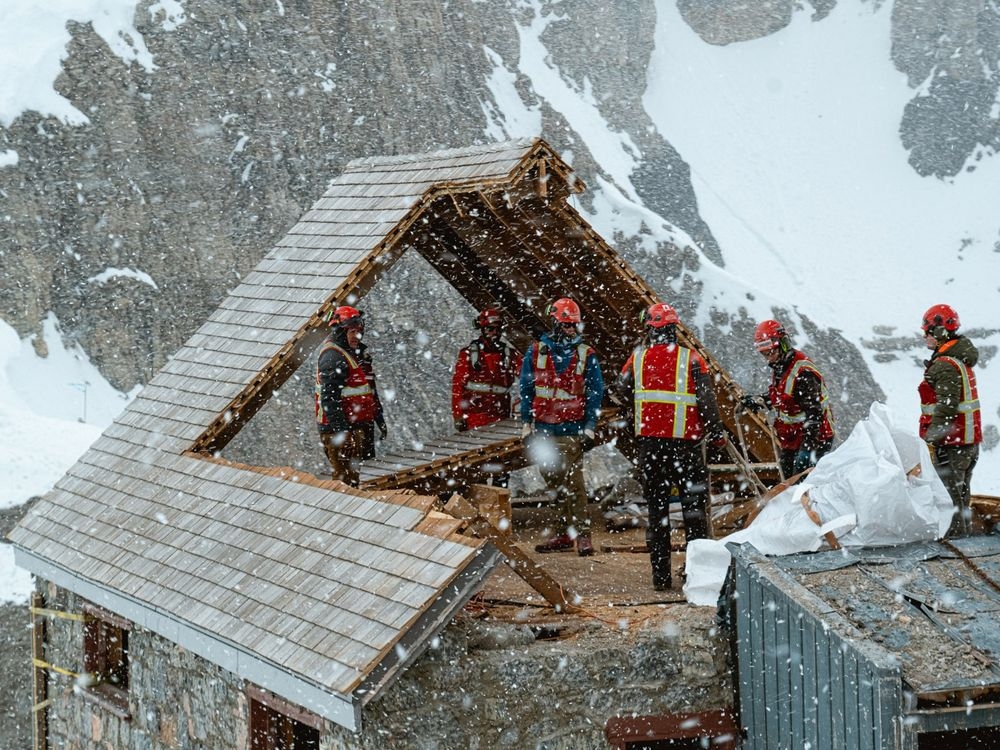 LAKE LOUISE, Alta. — When a daring construction crew entered a century-old hut in the Rockies on the first day of its takedown, they lit the fireplace one last time and discussed for an hour the gravity of what they were about to do.

“The whole crew knew the grandness and the sadness of what we were doing,” said Sean Alexander, the manager of the construction crew that last month took apart the Abbot Pass Refuge Cabin. It straddled the Continental Divide and the Alberta-British Columbia boundary about three kilometres above sea level and was the second-highest structure in Canada.

“This was not just a regular take down of a barn,” Alexander said during a news conference on Wednesday.

Parks Canada said only a piece of wall, some stone steps and a plaque about the cabin remains at the site that sits close to the sky in often-harsh weather.

Francois Masse of Parks Canada said the hut was built by skilled Swiss craftsmen in 1922 and could have stayed in place for decades to come had it not been for climate change.

“We invested significant amounts of money. Unfortunately, the ground just kept warming and resulted in cracks across the structure.”

Keith Haberl, with the Alpine Club of Canada, said there were a lot of tears when the dismantling began.

“Nobody wanted to see it go,” he said.

“People went up there as mountaineers to stay at the hut, burn fire. People who knew about it were inspired by it, wanted to go there one day and never could and now never can. Everybody is feeling the weight of that place (being) gone now.”

Haberl says the Canadian Pacific Railroad hired Swiss guides in the 1920s to work in Canada to take tourists to summits and up into the mountains.

“The Swiss guides built the hut based on construction templates, ideas, and standards that were used in Switzerland at the time,” Haberl said.

It’s named after Philip Stanley Abbot, who was an American lawyer and the first recorded person to die while mountaineering in North America. The Alpine Club of Canada’s website said 24 people could sleep in the cabin that was designated as a national historic site in 1992.

It was equipped with propane stovetops, an outhouse bathroom, propane-fuelled lighting and a wood stove for heating. Hikers used snow melt as their water supply.

Alexander said while crew members took apart the hut over the span of about 15 days, everything felt “on the edge and extreme.”

“The helicopters have a hard time lifting objects. The crew was feeling out of shape,” he said.

“I quickly reminded them on how hard it was to build the hut. We flew up in the helicopter and (the original builders) didn’t.”

Alexander said engines of their tools regularly froze due to the high altitude and lack of air pressure. Crew members took more breaks than normal.

“We had a really good helicopter company. The crew pulled together and was able to slow and steady take the hut down piece by piece.”

Alexander said crew members discovered a lot of objects in the cabin, including a well-preserved walking stick under the floor and unique coins that couldn’t have been found unless the wood was pulled apart.

“(It) was an exciting time for us because you’ll hear a scream from upstairs going, ‘I found something.’ Then we’d all go running up there and (say), ‘Oh, wow. That is one of the originals and had 1922 beside it.’ It really meant a lot.”

Masse said while some mountain rocks used to build the hut were dispersed to where they came from, some parts of the hut were kept.

“Parks Canada will be engaging with stakeholders, Indigenous groups and the public to help identify options for interpreting the heritage values of the hut, its contribution to rustic design architecture and its importance to Canadian national parks,” he said.

Masse also said the dismantling of the hut is one of many examples of how climate change is impacting Canadian parks.

“This is something as an agency that we have to be extremely cognizant about. We have a lot of scientific staff that are keeping a close eye on the influence in the environments that we’re managing, and trying to understand where it’s going and how we can mitigate it.”

Haberl said the loss of the hut is difficult for Alpine club members.

“It’s stands for a lot of what the Alpine Club of Canada has been about — backcountry shelters, mountaineering, safety in the alpine environment, skills training. Everybody is sad about it.’