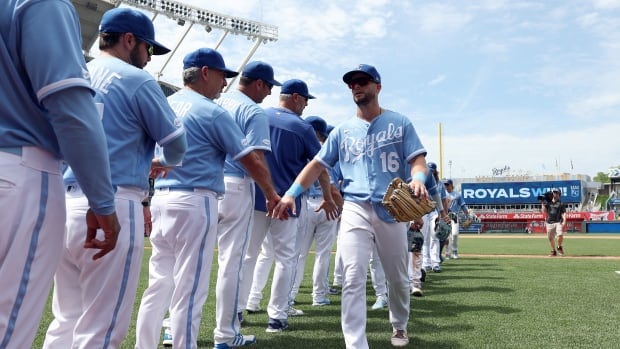 The Kansas City Royals will be without 10 of the 26 players on their active roster for their upcoming trip to Toronto due to Canadian restrictions on travellers who aren’t vaccinated against COVID-19.

The team is set to play four games in Toronto. The 10 players will be placed on the restricted list and forfeit four days of pay and major league service time in accordance with the terms of MLB’s collective bargaining agreement.

“It’s an individual choice,” Matheny said. “The organization’s done a real good job bringing in professionals and experts to talk guys through tough conversations and then put it in their hands to make the decisions they believe is best for them and their families.”

The club will name their replacements Thursday, along with an announcement about other staff who won’t be travelling with the club.

“Now what it presents is an opportunity for some young guys to step in who wouldn’t normally be here,” Matheny said. “It will affect what we’re doing rotation-wise and that will be another question that we’ll have to answer later. I’m excited about some guys coming in and getting a chance.”

Players cited personal decisions for themselves and their families behind their reasoning to not be vaccinated.

“I don’t feel like COVID is a threat to me,” he added.

The unvaccinated players said they felt teammates supported their decisions.

“We’ve talked to these guys, they’re not judging us at all,” Dozier said. “They have our backs. I don’t think we’ve ever dealt with something like this, where we’re being forced to take a vaccine just to go play over in Toronto. It’s just a weird situation. It’s unfortunate.”

“[The] staff, owner, GM, everybody, it’s been really cool to see how they’re handling it,” Coleman said. “Not like forcing it. I feel like we all have our own opinion, so it’s been really good that the higher-ups respect that.”

Merrifield had the majors’ longest active games played streak at 553 before a foot injury kept him out of action Sunday. He said he might change his mind if a similar circumstance presented itself later in the year.

“That might change down the road,” he said. “If something happens and I happen to get on a team that has a chance to go play in Canada in the postseason, maybe that changes. As we sit here right now, I’m comfortable with my decision.”